FIND THE TIME , A CRACKER MONTH TO FISH! 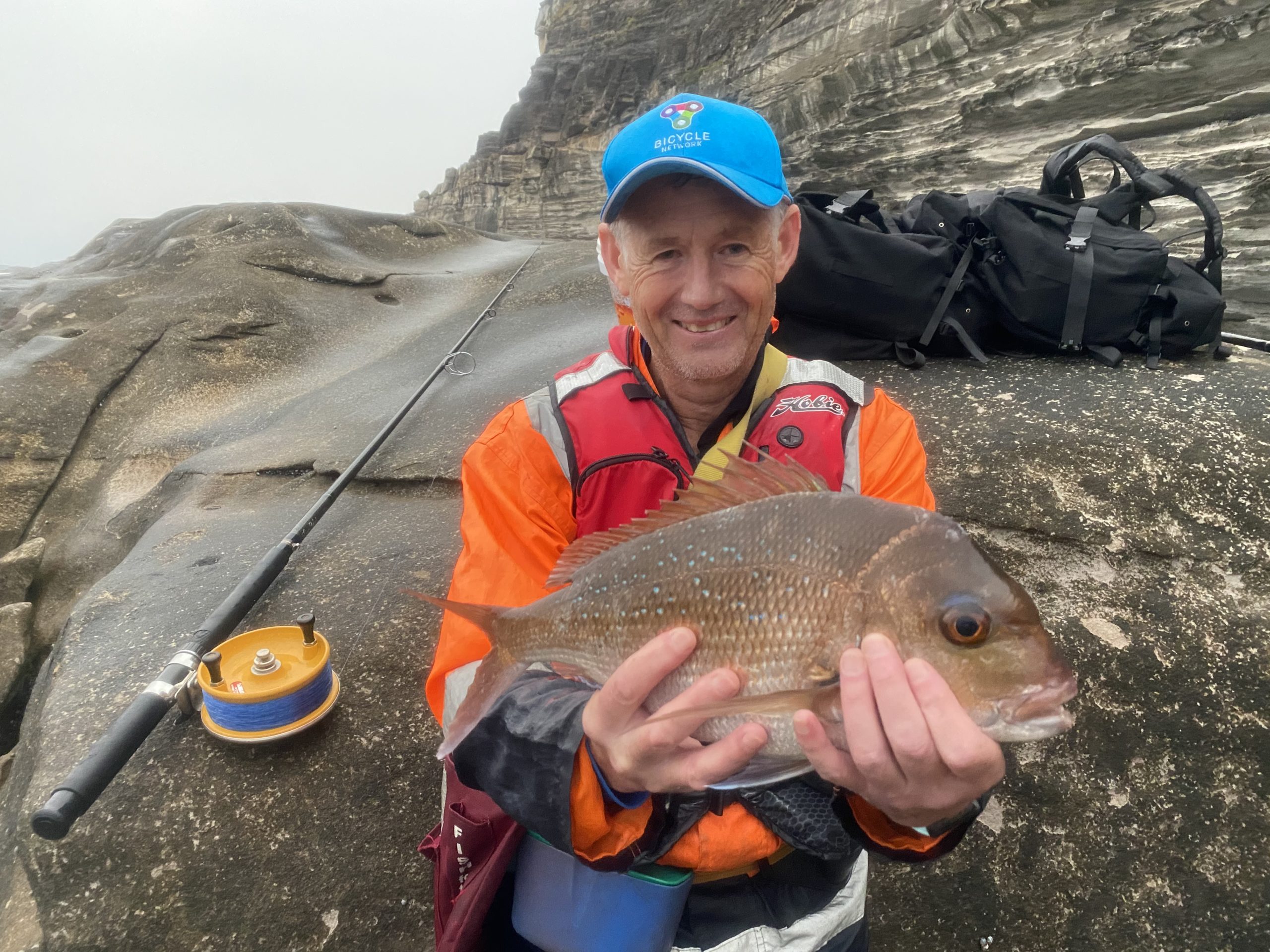 The dry weather continues creating little brown water run off from our estuaries. But regardless there has been days when the water clarity is only 60% or less. The spear fishos say that visibility is down making it difficult for them to see further than a few metres. I have noted this on some outings when fishing. When the current runs in close enough during a SE swell the water is generally a lot clearer. Some of the NE winds have been bringing in un seasonal cooler water with a strong green looking ting. This will change as the more consistent warmer currents become more dominant.

Rock Fishing: The bonito have finally arrived! These speedy little tuna specie average between three quarters to two kg, and at times up to four plus kilo. They are great on the plate providing you do not over cook them as they can get dry. A sensational sashimi fish. When you go to your local sushi train and choose that nice looking plate of tuna sashimi, mm taste good ha? well more often than not it is bonito especially if the flesh is light red rather than dark red. Bluefin tuna is generally dark red with the bonito being a lighter colour. Bonito can be caught using several different methods. Most often caught on metal lures like the sure catch knights. A good average size to use is 40gms. You can use as small as 10-20 gms which better suits what they may be feeding on but you might find it challenging to get the casting distance especially when the wind is above moderate so the heavier metal is a good average. When using a Daiwa 4000BG size reel the spin rate can vary. If you stick to two full revolutions of the reel ever second that should be fast enough to arouse interest from a bonito. A rod in the 3.2m plus length suitable for 8kg JBraid with a 10-15kg fluro carbon leader of suffixinvisi line and your set to go, Of course never forget these, life jacket, steel spike boots, rain coat and seas under one metre preferred. Spin the deep water ledges of 6m plus for better results. for the beginner/ intermediate seek advice from reputable people, shops that have staff that rock fish or me. I am a full time rock and beach fishing guide.
The kings are in variable sizes ranging from under sized fish to some brutes up to 130cm off the ocean rocks and even in the harbour. A well presented eastern sea gar on a two hook snelled rig or on a set of gang hooks in the size range from 5/0 to 7/0 Mustard 7766D and 60kg plus swivels in between the gangs works a treat. Rapala surface pro stick bait 130mm, jet popper 130mm will suit small to medium size kings even the brutes.

Snapper distance casting and wash fishing this month. Regular catches of plate size from 32cm to 40cm fish with reds to over 60cm for the odd angler that get the opportunity to hook them and of course landing them off the ocean rocks, a challenge most of the time.Using squid strips, make sure they are fresh squid as the reds like kings can be really fussy. Three quarter pillies, bonito strips, king prawns, for the wash or distance casting. Reds, kings, bonito, pelagics like the deep water rock spots. They will often venture to these deep ledges with the vertical submerged wall to ambush prey like yellowtail, squid , cuttle fish and more. And of course for the snapper and bream the crabs, sea tulips, cunji for them to fead on. Add some white water for cover and you have the ingredients for these species.

January is not normally a popular time of the year for rock blackfish. Generally anglers have been diverted to the above species. Some days can be ordinary for the pelagics and reds so the pigs can be a great substitute for a sometimes fish-less outing. As a back up take a few loaves of bread for burley or and bait and some endeavour, banana or king prawns. Fish the boulders or a submerged ledge for these hard fighting and super tasty fish. Half run in tide to a couple of hours out is generally best.
For the kings, bonito, tailer, salmon and pigs, luderick the Hat below the Quarantine wall at Manly is a good ledge, Flat rock at South Curl Curl but like the Hat can get really crowded. if you prefer to avoid the crowds and that is only to an extent, (you are fishing Sydney) try Turremetta head South face. At Bangally head there is a track going to the cliff ledge just past the bend at Milga rd and Watkins rd North Avalon. The lookout is only 40m from the road. The main ledge can be seen there. A fairly steep decent, not a climb but you have to be careful. Spin off the ledge there, some reddies distance casting and good for luderick. Rock blackfish in the boulders so a good spot to have a go. Do Not Fish It In A Swell Above One Metre! 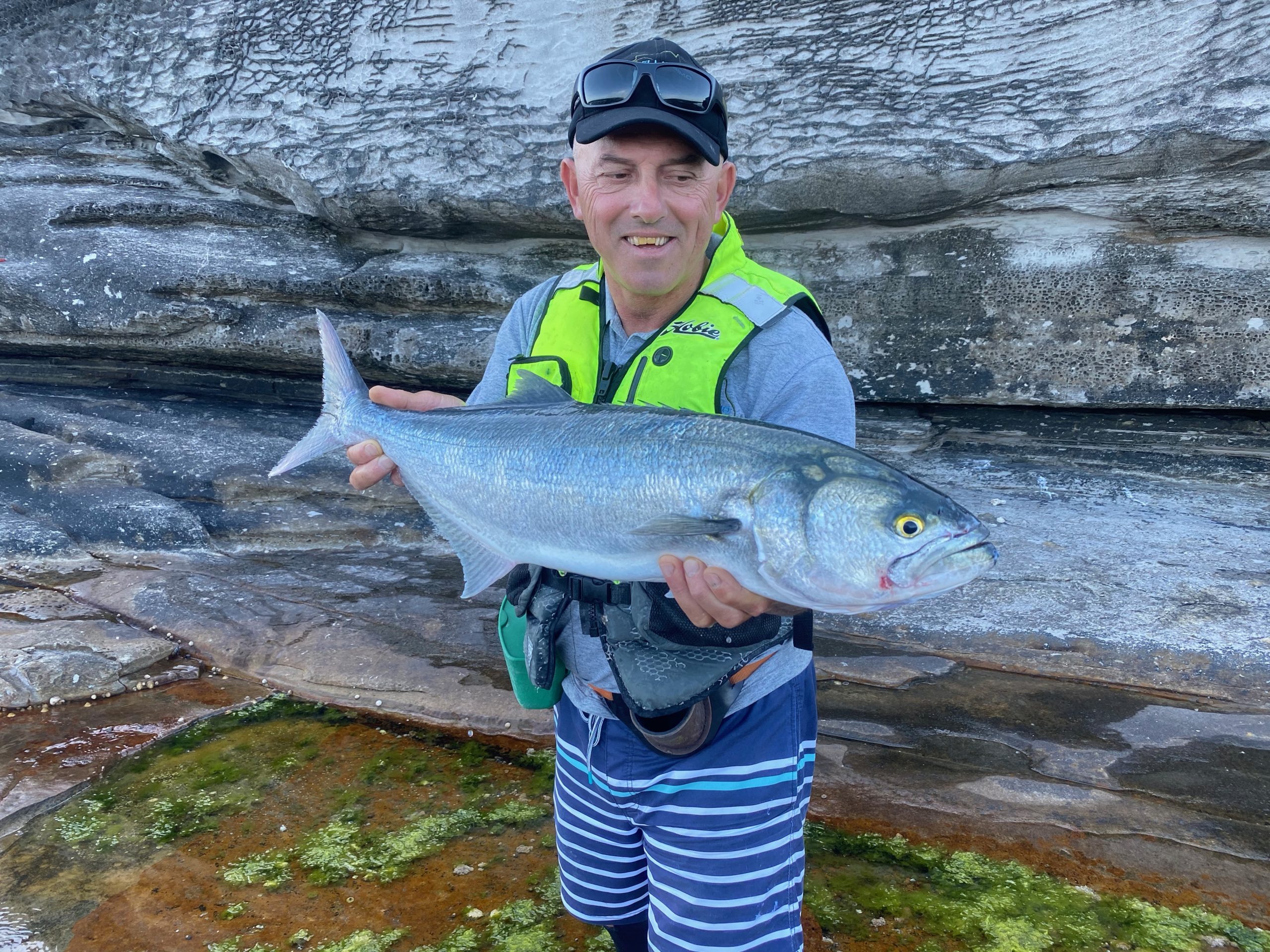 Beach Fishing: Not all beaches are producing good bags but they are all producing some quality fish. Starting at Palm Beach. The northern corner for bream and some whiting, As you travel further south bound whiting, bream, and n the evenings salmon tailer and a good chance of a jewfish. Around the two massive boulders fish for whiting, bream and also worth a go at the other species in the evenings providing the holes, sand banks are there. Typically look for beach structure. Palm beach sometimes has a run of bonito which venture in close enough to spin for. it would pay to have a 6-8 kg outfit on stand by just in case you see a ‘bust up’. Keep a vigilant eye out whilst your fishing for your whiting and bream. You may notice surface activity which may look like this. Splashes, spray of water , a boil up which look like ‘boiling water’ 30-60cm wide then it calms off a few seconds later. it may happen several times, or even concetutive boils, sprays, and splashes. When you see this don’t stand there like a salami, run to the rigged spinning rod which has the metal lure and put your whiting/ bream outfit in the rod holder and run back to where you seen the splashes and get spinning. No time to dawdle as this surface action may only last for seconds. spin one rotation to two rotations of the reel per second. Try not cast right in the middle of the school as they may make them ‘sound’ meaning scaring them off with the sudden heavy splash of the metal lure if you cast into the middle of them. If you see them heading from say for example left to right cast a few degrees to the right then you lure and fish passing by will meet up at the right time. Repeat that process so you can have several goes at the pelagics (salmon, tailer or small tuna specie) without putting them off. When the surface action is over get back into your whiting/ bream fishing. Fishing this way just adds another dimension to your beach fishing, keeping you busy. Most often a spinning reel is used but having an alvey reel with a medium action metal lure works fine. I recommend a metal with hexagonal corners which will give the metal some movement without too much speed required by the Alvey.
Big Aussie salmon are being caught and sizeable tailer as well. Tailer to one kilo and the salmon to 3kg with a report of a four plus kilo salmon. Catching big salmon in the surf is so much fun. Using the spin gear with a metal or the traditional method with a set of gangs and a whole pilchard is a great reliable and more relaxing way to fish for them. When fishing with a whole pilchard you can often get sand flathead as a bi catch. You may also get pecks which often do not load up the rod and you wind in with little or no bait left? well that can be sizeable bream biting. A half pilchard, a strip of fish bait which will suit a size 1/0 to 2/0 size hook will give you a better chance of catching the bream rather than the occasional hook up on a set of gang hooks. Even having a second rod set up for bream on stand by can be a wise choice.

The jewfish have been off and on as they often are. January is a good month for them, but as you may have heard and read many times put in the outings and the time fishing for this specie. You may be delighted to catch one on your first outing but more often than not i recommend putting in at least two consecutive outings in a row at least during the full moon, new moon high tides in the evenings which are between 9pm to mid night this month. Start a least half an hour before dark and set up at a good gutter of preferably two plus metres dept. Live fish like yellowtail, mullet in that 20 to 25cm size, squid whole or strips and make sure the squid is Fresh.

During this holiday period be wise when you’re rock fishing. Fish safe and have a back up plan B! Merry Christmas to all and have a Happy New Year. 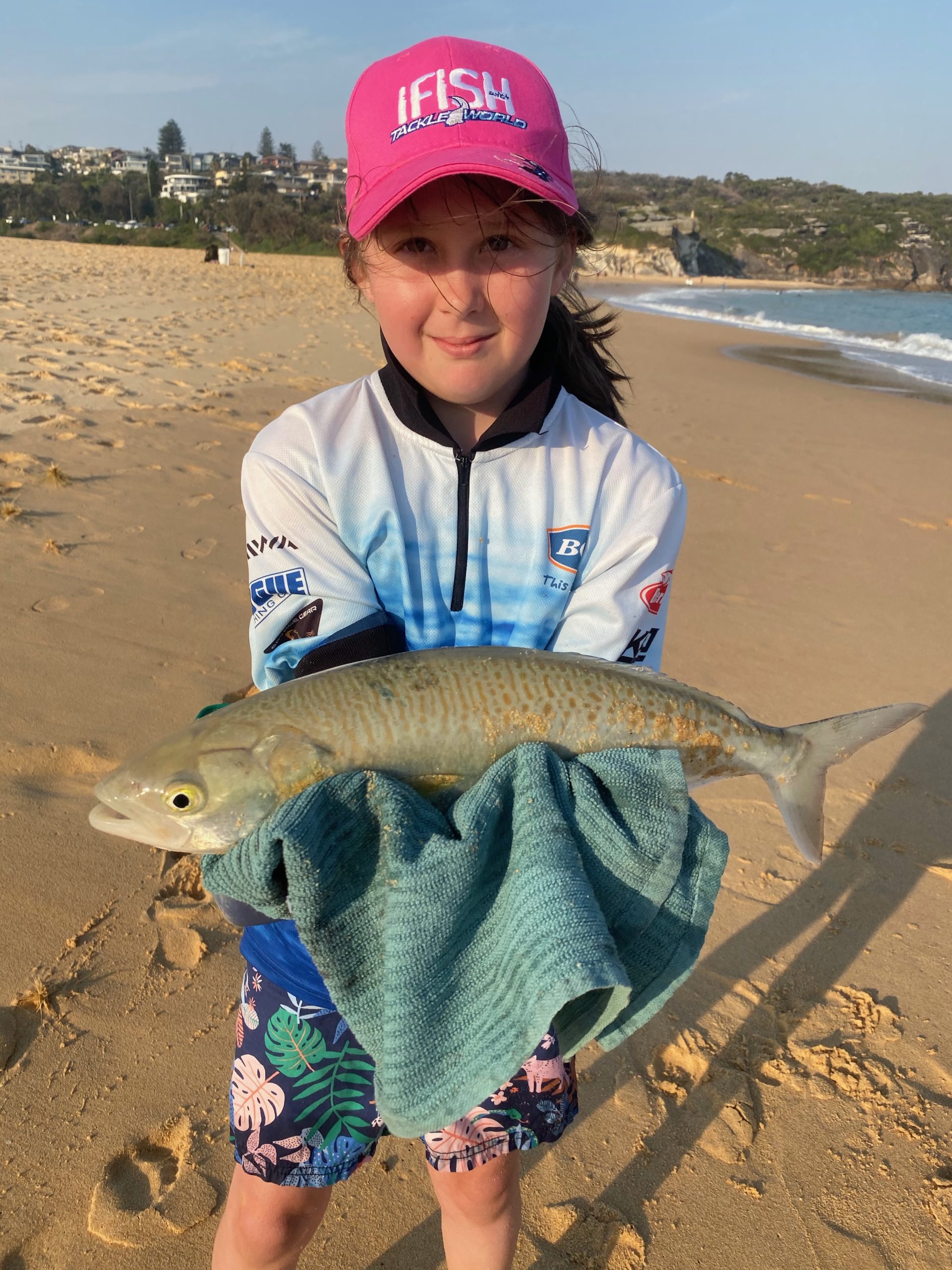